March 13, 2017
Lead vocalist and guitarist J.J. Otero grew up singing in church, picked up the guitar at age 17, and started the band Saving Damsels in 2007. That band is now called Son of Hwéeldi. Inspired by today’s politics, the band’s “Native Soul Rock” is now “Resistance Rock”. Along with a new sound and album, the band’s name change, honoring J.J.’s Navajo and Hopi heritage, comes with a lyrical shift to current affairs and Navajo history. Hwéeldi is Navajo for the area at Fort Sumner, New Mexico where the U.S. government forced Navajo and Apache people to march in the Long Walk of 1864. The tracks on Son of Hwéeldi’s latest album “019910” focus on the historic persistence and current struggles of the Indigenous community: corruption in politics, the NoDAPL fight, respect for water, and gratitude for life. 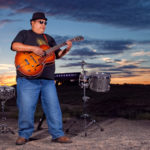