March 21, 2016
Scandinavian Inuit singer/songwriter Simon Lynge grew up in Qaqortoq, Greenland. From his childhood learning music from his accordionist father and tending to his neighbor’s sheep, Simon was involved in theater and grew up to enroll in the Holstebro Music Conservatory in Denmark. His music career includes collaborations with band members of great artists such as James Taylor, Bruce Springstein, and Paul Simon. Following his critically acclaimed debut album, Simon released his second album The Absence of Fear. 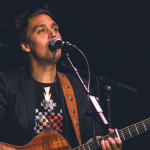