Jeremiah and the Red Eyes

May 23, 2016
“Delta Blues and Twangy Grooves” is how Jeremiah Sammartano describes the Los Angeles based bluesy Americana group he fronts, Jeremiah and the Red Eyes. The Emmy nominated Navajo singer/songwriter shares his album, Home, which features songs of being away from home, the idea of what home is or was, and his travels across the country. The album was recorded in various bedrooms from Nashville to Southern California and finished after many miles had been traveled. 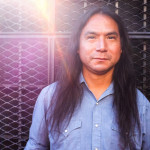 Jeremiah and the Red Eyes