May 7, 2018
Based in Unalakleet, AK, Iñupiaq singer-songwriter Ryder Erickson writes, records, and produces his own music. His guitar and vocals carry an emotional honesty and grit reminiscent of folk/rock artists from Bob Dylan to Damien Rice. Scandinavian on his father’s side and Native on his mother’s side, Ryder was influenced by both cultures and also discriminated against for not conforming to one or the other. He picked up the guitar at age 12, joined a guitar club at 14, and started a band in high school. His dedication to a music career strengthened as an adult after he underwent back surgery and needed to quit working jobs that were physically demanding. Encouraged by friends and fans to record and get his music online, Ryder became passionate about putting out songs that are both conscious and positive. He uses music to preserve his culture, inspired by his love of Native drum and dance and the will to combat the ubiquity of western culture in Indigenous communities. His songs reign in sadness and anger from the past with happiness and pride for the future. As he works to release a new album, Ryder also makes a living as a painter and is a stay-at-home father of three. 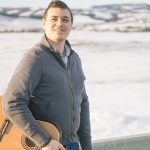