February 28, 2018
The 2017 album Letting Go is Ojibwe singer/songwriter Paco Fralick’s musical debut. Paco grew up near the reservation in Rhinelander, Wisconsin, taking piano and violin lessons, absorbing the songs of his musician father, and writing his own songs from an early age. His blend of Native Americana, folk/country, and pop takes influences from artists like Merle Haggard and Don McLean while incorporating Paco’s own spirituality and love of music. Featuring collaborations with Michael Bucher and Peter Phippen among others, the songs on Letting Go are inspired by dreams, memories, and sociopolitical issues. As Paco supports the protests at Standing Rock and witnesses the alcoholism and homelessness in various communities, he channels his feelings and experiences into song. Receiving a Top Five Award at the 2016 Native Trailblazers Music Awards, Paco also performs at the Indian Summer Festival and Women & Water Symposiums in Wisconsin and Illinois. 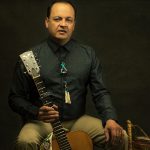