January 15, 2018
Chris Lukin of the band N8V is Alutiiq from Kodiak Island, AK. His modern rock style is rooted in the experiences of being a Port Lions Tribe member, coming from a small fishing village and subsistence lifestyle. Growing up in a family of guitarists, Chris discovered he could best share his thoughts and opinions through music. He started N8V in 1999 with a childhood friend, inspired by bands like Metallica, Guns N’ Roses, and Alice in Chains. Though Seattle became his new home, Chris’ heritage and values drive the songs in N8V’s EP Nations Rise and his later solo work. He sings about sociopolitical events like Standing Rock and the Exxon oil spill of 1989, the effects of which he saw firsthand. He promotes appreciation for the earth and the desire for the voices of Indigenous people to be heard. 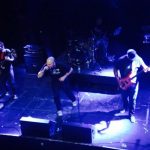