Melissa Doud with the Mambo Surfers

June 25, 2018
Iraq war veteran Melissa Doud, Warrior Songs founder Jason Moon, and Milwaukee music group Mambo Surfers crossed paths in 2016 to create a song of healing. The song began as a poem by Melissa. Her poem about a jingle dress she created out of spent bullet casings collected during her 20 years in the Army was turned into a song by Marco Frucht and Saji Villoth. It was recorded at SurroundinSound Studios in Wauwatosa, WI with Melissa singing and Saji’s band, the Mambo Surfers, providing the music. After Jason included “Bullet Dress” on the various artist cd, “Warrior Songs Vol.1”, the song earned a nomination at the 2017 Native American Music Awards. Made out of M16 shells instead of traditional silver, Melissa’s medicine dress symbolizes the transformation of suffering to a place of safety. The music of Warrior Songs is inspired by words shared firsthand at retreats across the country that gather people together who have suffered from PTSD and MST (military sexual trauma). Jason connected with the Mambo Surfers after being deeply affected by their album “The PTSD Songbook”. Together, their music expresses the experience of war, trauma, transformation, and healing. 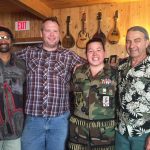 Melissa Doud with the Mambo Surfers