June 26, 2017
Born into a family of musicians, Marc Brown of Marc Brown & The Blues Crew was raised in Huslia, Alaska. He learned to play the guitar starting at age four and eventually joined his grandfather’s band, gathering a country gospel influence. Marc later studied at Berklee College of Music. Throughout their more than 20-year career, Marc Brown & The Blues Crew opened for several big name acts including ZZ Top and Jethro Tull. Their 10th album, Indian Rock’n’Roll, won them a 2011 Native American Music Award for Best Blues Recording and a nomination for Group Of The Year. Their latest album, “Still Got the Blues”, stays true to the band’s danceable blues sound. 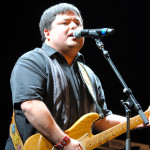