July 2, 2018
From the band Indian City, the album Here and Now is a folk/pop celebration of generations of Indigenous music on Canada’s 150th anniversary. Vince Fontaine and a collective of musicians coming out of Winnipeg, Manitoba became Indian City in 2012 to represent cultural issues through music and “create a vehicle that would bring in some of these younger stars”. With the help of Eagle and Hawk’s Jay Bodner and Pamela Davis on vocals, Here and Now is Indian City’s third studio album. The lyrics talk about issues like the unsolved cases of the 1200 missing and murdered Indigenous women of Canada and the hope for healing to come to the people of Turtle Island. The band continues to travel, bringing new Native voices and a spirit of youth to communities around the US and Canada. 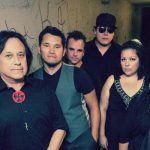