An old soul, with plenty of time ahead of her – this young Indigenous singer/songwriter from Okotoks, AB began performing and songwriting at the age of 13. Inspired by her family and the world around her, Brettyn has always believed that music is a powerful way to share experiences and connect all people. Her songs are like a page out of everyone’s journal.

A natural songbird with a powerful range, clear tone and Alison Krauss-like vulnerability, Brettyn Rose translates emotion and meaning behind her songs. Her kind and honest nature has created a buzz and this has supported Brettyn’s early success in the music world already including two YYC Music Award Nominations. She is a real and passionate performer, with hundreds of shows already under her wings.

Brettyn’s sweetness combined with a fearless spirit and hardworking approach not only helped her graduate high school, in two years, and enroll in University a year early, but also have won her several awards and discovery competitions. She regularly performs the Canadian and American national anthems for the WHL Calgary Hitmen and the WCBL Okotoks Dawgs. She is always immensely proud to honor the country and community with the national anthems.

For the release of “All I Want Is You”, and her upcoming EP, Brettyn has teamed up with Producer and JUNO award winner Mike Little (Black Mountain Whiskey Rebellion, Road Hammers),  and his partner Candace Lacina (Shania Twain, George Canyon) in their home studio, Legion Lounge. The song is blend of country roots-pop, in a new genre the studio team is now calling “Sunshine and Heartbreak.” 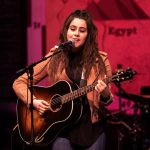