December 3, 2018
Bluedog is a family band based out of the twin cities, Minneapolis and St. Paul, Minnesota. Formed by Ponca lead guitarist Eric Buffalohead and his wife and singer-songwriter Joni who is Dakota, the band has a genre crossing style that comes from a love of the blues and passion for Native issues. Eric is a musician of 20+ years and also a university professor. Joni was encouraged by their twins to fill the band’s spot for a female vocalist, then started writing songs. Their daughter Alex joined the band at age 16 playing the keys. Bluedog’s latest album, Red White & Blues, is a collaboration of all three family members with the help of Tom Suess on bass and Greg Mans on the drums. The album is inspired by experiences of Native people, from historical trauma to racial profiling, and influenced by artists from BB King to Santana. Bluedog continues to find the link between Indigenous people and blues music, traveling for events like the International Blues Challenge in Memphis which offers iconic music history landmarks as well as markers on the Trail of Tears. The band is also writing new music for their next album. Like their previous award-winning releases, it will be an outlet for stories of injustice and a platform for dispelling stereotypes and recognizing the contributions of the Native community. 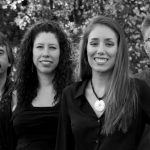