February 5, 2018
Arthur Renwick was born and raised within the Haisla First Nation of Kitimat, British Columbia. Carrying on the tradition of Cigarbox guitar playing, Arthur’s bottleneck slide and folk-style storytelling is reminiscent of greats like Muddy Waters, Mississippi John Hurt, and Hank Williams. His album The Cigarbox Chronicles tells stories of love and loss, while also being inspired by Renwick’s upbringing in a small fishing village. Aside from touring worldwide, Arthur now splits his time between Toronto and the Rama First Nations in Northern Ontario. Both a musician and a visual artist, he has performed at the Canadian Cultural Centre in Paris and the National Museum of Brazil. Arthur’s artwork exhibits at the Leo Kamen Gallery in Toronto and was featured in the 2008 winter issue of Canadian Art. 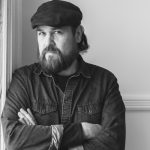